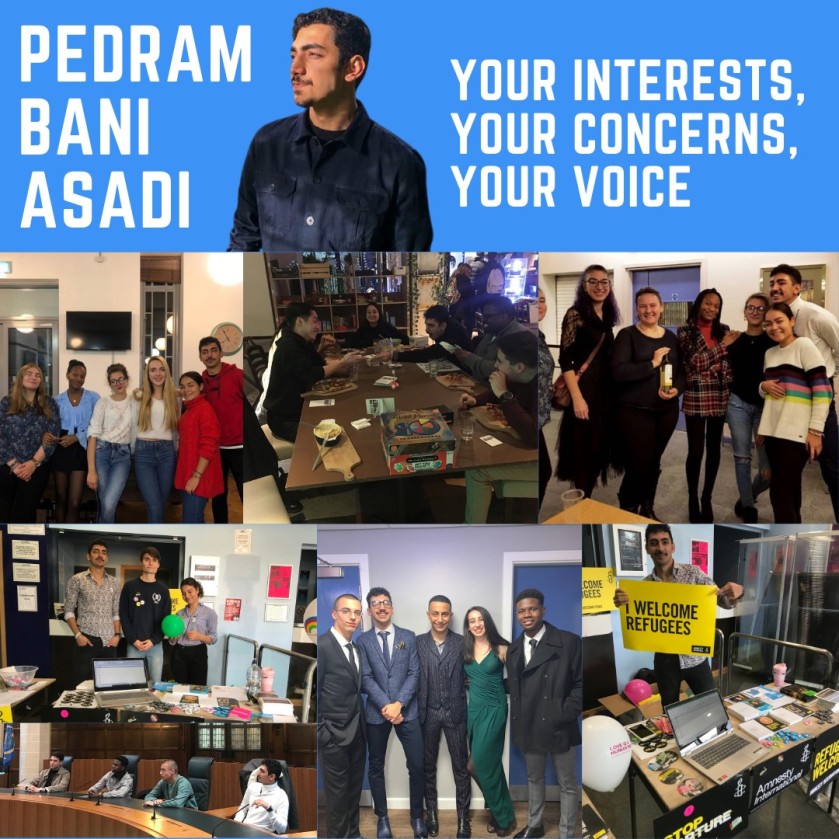 UPDATE: As of the evening of Wednesday 3rd March, Pedram Bani Asadi has been removed from the election race. You can read more about this development here

Pedram Bani Asadi believes he’s the right man to stand up to the University’s senior management if he’s elected as the President of the University of Leicester’s Students’ Union this week.

The third-year Law student spoke to Leicester Student Magazine to outline how he plans to stand up to the University’s Vice-Chancellor Nishan Canagarajah, following the proposed staff redundancies and Canagarajah’s widely criticised management of the University.

‘Time to stand up to Nishan’ is Pedram’s opening manifesto line and he believes that one way to do that, could be for the students to consider striking alongside the staff.

“The main reason I’m running is that there’s so many issues in the SU that need to be solved,” he told LSM. “I think the SU needs to be more approachable. The SU needs to hold the authorities more to account and not be afraid of them.

“They have union powers that they’ve never used. The students have never been on strike. Maybe it’s time to think about those options, especially because staff have been striking. If students join them, senior management has no power anymore.

“I want the Students’ Union to act like an actual union. The way I want to stand up to Nishan is that I want to challenge him in every meeting. I don’t want him to have an easy meeting over this next year, I’ll challenge him anyway I can.”

When asked what he’d say to the Vice-Chancellor in his first meeting as President, Pedram would tell “out-of-touch” Canagarajah of the students’ anger and call for him to take a pay cut to his £250,000-per year salary – something he refused to do when asked by Pedram’s Presidential opponent Rhiannon Jenkins.

Another important issue that Pedram is quick to highlight is the Education Safeguard. He’s been serving as a law department representative this year and he voiced his concerns to the University. He was ignored.

“I want to change the focus of the SU to the most pressing issues students are facing,” he added. “Safety net? We didn’t get that, I’m very angry at that and many students are as well. They demand more.

“For example, we [course reps] said that dissertations should be part of the 30 credits that we’re allowed to remove as part of the education safeguard, even though dissertation is an optional module for our course and many others. They didn’t agree to that.

“They gave one safety net that applies to all department, without considering specific departmental needs. That made me really angry. I want to be in a position to address these issues, that’s why I’m running.”

Another topical issue that is a cornerstone of Pedram’s pitch for presidency is the issue of tuition fees and where that money goes. In his manifesto, Pedram promises a “full report on how tuition fees are spent.”

Pedram is keen to improve the accessibility and accountability of the Executive Officers. He proposes that the meetings will take place in the middle of the Students’ Union so that any students who want to listen or contribute to the meetings can.

As an international student himself, Pedram has first-hand experience of the issues they face and feels as if their concerns are currently underrepresented within the University.

“I want to give the voiceless a voice,” he said. “It’s also part of Edwin’s [Education Officer candidate] campaign, he’s an EU student and he believes support for EU students has not been so good. For me, it’s the same because I’m an international student and I see the problems that these students are facing.

“I heard from a postgraduate students who are concerned about the age difference, they feel uncomfortable joining societies. I want to make it better for them, let’s create societies for them or events more catered towards them. There’s much more we can do.”

Since he joined the University in 2018 he’s consistency represented students in a variety of roles. He was elected as an NUS delegate in last year’s election and he’s served on the committees of multiples societies such as Amnesty, Law, Pro Bono, Persian and the French society.

Pedram also talked about his hope for inspiring other students to believe in themselves and run for student leadership positions, whether that be for an Executive Officer next year or leaders for societies or courses.

Ultimately Pedram believes he’s the right man to stand up to the Vice-Chancellor and “not back down” like the SU has done on previous issues.

You can find our interview with Rhiannon Jenkins, on of the other Presidential candidate, here. Ghanshyam Nonghandvadra is also on the list of candidates running for the position.