Trigger and content warnings: This article discusses drugging, needles, spiking and victim blaming in detail. There are minor mentions of domestic violence, sexual assault and stalking.

In recent months, there has been a vast rise in reports of women and men being spiked at clubs and venues across the country via hypodermic needles. What felt like freedom to attend clubs again after relaxed COVID restrictions has turned cold and frightening. The daunting reality that we are not safe has hit home once again.

While clubbing at MOSH nightclub in Leicester for a friend’s birthday, I struggled to forget about the terrifying rise in spiking reports. There was an unsettling reduction in the amount of people present. I was constantly aware of the people stood too close to my friends, and I found that I could not order myself a drink as I wanted to stay alert in case something happened.

This is not what clubbing is supposed to be like. As a woman, clubbing has never been a particularly enjoyable experience due to avoiding being groped, protecting my friends from the unwanted hands of a stranger and wondering if we are being followed home. Never did I think that I would have to worry about ending up unconscious, nauseous or losing control of my body, because a stranger decided I deserved to be spiked.

Who are Big Night In?

‘Big Night In’ is a campaign group urging clubs and venues to do more to prevent spiking on their premises; the Leicester committee are organising a march in the coming weeks to make a statement about this critical issue. The group called for people across the UK to boycott clubs during the final week of October to demand better safety measures be put in place. Big Night In are calling for all nightclub staff to undertake active bystander training at least twice a year, and for the Students’ Unions to make it compulsory during Freshers induction. Clubs should provide a designated welfare officer who is on hand to intervene and recognise cases of spiking, sexual harassment and hate crime. Students’ Union should offer safe methods for students to get home, such as a night bus. Making students feel safe when going out again will mean learning how these events occur and how they can be prevented. It will mean being held accountable and making the wellbeing of young people a higher priority.

How widespread is spiking?

In 2019, the BBC reported that there had been more than 2,600 reports of spiking in England and Wales since 2015. ‘National police figures confirmed there have been almost 200 confirmed cases of drink spiking in September and October alone, with 24 reports of ‘spiking via injection.‘ These figures only account for the cases that are reported to the police.

What is victim blaming?

One of the reasons these figures are underestimates of the true number of cases is due to victim blaming – the act of suggesting a traumatic event is the victim’s fault. This is a long-term issue within society and is seen in many instances, such as with domestic violence and sexual assault. The rise in reports of spiking has highlighted this incredibly damaging issue, with victims of spiking becoming the objects of questions, controversial comments and doubts. It becomes a question of: why weren’t you watching your drink, or watching your back? Why did you go out that night? Are you sure you didn’t take anything? Are you sure this isn’t all for attention?

Victim blaming is detrimental as it becomes difficult for the person to speak up and receive support, while also allowing the perpetrator to get away with it. Society clears the assailant and places doubt on the legitimacy of a victim’s experience, a result of a patriarchal society. ‘Perpetrators are overwhelmingly, although not exclusively, male‘ – showing that male dominance and lust is the norm. This creates the ridiculous notion that experiencing sexual harassment, assault or violence is a women’s issue, rather than a societal one that we all have a role to play in fixing.

Nightclubs and venues have a duty to make their establishments safer. This begins with the basic requirement to search on the door, provide drink-stoppers to cover drinks and having a trained medic on hand. It also means believing victims when they ask for help, investigating how an incident occurred, and preventing it from happening again.

In the last few months, nightclubs around Leicester took to social media to outline their approaches to prevent spiking at their establishments. MOSH, one of Leicester’s most popular clubs, have made anti-spiking products for drinks available behind the bars and have ensured there are medically trained staff on hand. Rockstar Promotions, who regularly run student events at the Leicester O2 Academy such as LetsDisko and Supersonic, have taken similar measures as well as increased security. However, LetsDisko did not take part in the boycott on Wednesday 27th October and explained on Instagram that this was due to ‘significant unrecoverable costs’ caused by the coronavirus pandemic.

Clubbing is blasting music while best friend does your make-up. Clubbing is wondering whether you will need a coat or a jacket, or whether you can go without. Clubbing is dancing with your friends to music that will have your head thumping by the end of the night. Clubbing is taking a glass of water to bed because you know you will need it in the morning. Clubbing should not have to be keeping a watchful eye on the man who will not stop looking at your friend, or wondering whether you can trust the person stood behind you. It should not be watching your drink being poured at the bar, keeping one hand over your cup at all times. Clubbing should never have to mean ending up at the hospital, scared for your life and wondering how to tell your parents.

Anna O’Sullivan is a second-year English student at University of Leicester. She has a love for writing, dogs, chai lattes and Wednesday night socials. Find her on Twitter: @annasreading and Instagram: @annaxosullivan 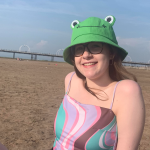 I'm a second-year English student at at University of Leicester. I am incredibly passionate about a range of subjects and believe everyone's voice deserves to be heard.

I'm a second-year English student at at University of Leicester. I am incredibly passionate about a range of subjects and believe everyone's voice deserves to be heard.

Why WAP was so controversial; an analysis

‘This country is a shambles’: Students React to Liz Truss’ Resignation