“I had big ideas, the band were so excited”, croons Alex Turner. At this stage in their career, Arctic Monkeys have headlined Glastonbury a couple of times, broken America, grown an increasingly diverse fanbase and won critical acclaim and multiple awards.

Yet on their seventh album, there’s a palpable sense of the bittersweet. Sadness, regret – those big ideas are in the past, and now Turner “cannot for the life of me remember how they go”.

After the 2013 release of AM, Arctic Monkeys had a clear path to becoming the unanimously agreed biggest band in the world: carry on the big guitar riffs and greased up sultriness. All they had to do was wait a couple of years and make AM Part II. Instead, they had a five-year break between albums, and returned with a sarcastic, loungey concept album about a hotel on the moon.

Tranquillity Base Hotel and Casino is a contentious album among the fanbase. Hated by the old fans who want a return to the fast-paced garage strumming and banging of their debut; hated by the new fans for ditching the quiff and riffs for a beard and keys. But four years on, it may well be Turner’s best work. Heading into his 30s by progressing his songwriting in an unexpected direction, with complex arrangements and lavish instrumentation paired with frequently hilarious, self-aware lyrics. Reckoning with his newfound status as the saviour of rock and roll by flying away and taking the band far off into space.

The Car feels a more natural musical progression from their previous record but is thoroughly back down to Earth. The sound feels lived in now. Turner is no longer exiled in an imaginary lunar hotel, instead exploring similar motifs and musical longing but from the perspective of someone who no longer needs a persona to escape himself and his status. He is not running away from being the world’s biggest rock star but has simply moved on from it. AM still exists, and is as popular as ever through the power of TikTok, but that is not Turner’s business. He just wants to move forward as whoever the real Alex Turner is now.

The first track and single – ‘There’d Better Be A Mirrorball’ – sets the stage for the record. A moving piano melody interrupted by staccato hits of strings, marking the beginning of a romantic ballad. The famously energetic drums of Matt Helders continue their journey towards restraint, as he gently taps his ride cymbal. “Don’t get emotional, that ain’t like you”, Turner sings with an almost overly emphatic enunciation. His vocal delivery is more of a constantly moving train of thought than melodic line these days, but the wholehearted emotion and dynamism he throws from his vocal cords creates a unique lease of life. As he pushes into falsetto during the song’s climax, he is practically floating.

The feeling created is as illustrious as it is mournful. This aura is consistent throughout the record – when the guitars and drums finally break into ‘Body Paint’, the effect is more melancholy than epic. As in ‘…Mirrorball’ where “Yesterday’s still leaking through the roof”, Turner continues to examine what was once fresh and exciting with a set of tired and weary eyes. “I’m keeping on my costume, and calling it a writing tool” Turner reflects, looking back on the faces he wore as a frontman. The previously mentioned ‘Big Ideas’ a reaction to the overwhelming, intense artistic expectations thrust upon the band.

These subtle piano or orchestral led tunes feel a reaction to the massive ambition of Tranquillity Base. The songwriting is just as intricate, but with more emphasis on personal humanity than complex musical arrangements in tracks such as ‘Four Out Of Five’ or ‘Star Treatment’. Both albums are introspective, but Tranquillity Base was more playful and humorous. The Car, like its title, is more simple in its premise. Turner has transcended the pretend, exploring instead his real relationships and anxieties.

That’s not to say The Car is not musically dynamic and inventive. The funk groove and twanging guitar line of ‘I Ain’t Quite Where I Think I Am’ brings the beat straight back up after ‘…Mirrorball’, before ‘Sculptures of Anything Goes’ pulls you straight back into a trance. As sexy and heavy as anything on AM, the slow build and massive booming electronics as it climaxes feels unlike anything the Monkeys have done before. The two acoustic guitar-based tracks juxtapose each other: ‘Mr Schwartz’a cute and simple ballad that Turner contextualises as “half a love song”; the title track an initially more folky endeavour before finger picking makes way for a swaggering electric solo.

Perhaps the album’s finest achievement is its closer, the sweeping three chord strings of ‘Perfect Sense’. A song of such euphoric emotion, but one that almost feels too short. But perhaps after the grand scale and ever-changing compositions of Tranquility Base that is the point. “If that’s what it takes to say ‘good night’, then that’s what it takes”. After an album of quiet contemplation, back down to Earth, Turner has realised that all he needs to do is just exactly enough.

Auden Chamberlain is a second-year Politics and Sociology student. As well as writing film reviews, he enjoys playing guitar and is President of Band and Gig Society. For more film related writing, you can follow him on Letterboxd: @arjchamberlain. 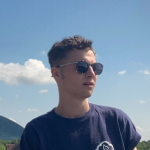